What Language do Minions Speak in Despicable Me Movies? 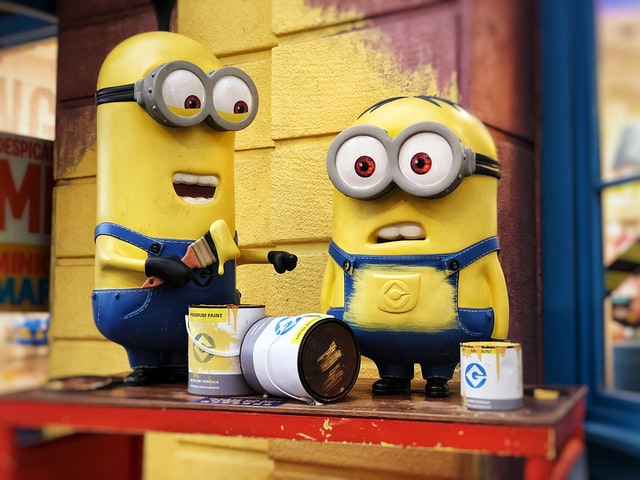 Thanks to “Despicable Me” movie and hype that followed we are all familiar with mischievous but goofy and lovable yellow creatures called minions, yet we all left cinema wondering – what language do minions speak? It is not a new concept for movies to feature custom languages, but we all agree that an artificial language never sounded so endearing. When we review specific tongues created for cinematography, mind usually conjures one, which sounds a lot like Dothraki or Valyrian from famous Game of Thrones, or Naʼvi from Avatar. However, language we were introduced to in “Despicable Me” is a whole other deal – it lacks in epic sound, but more than makes up for it in its whimsicality!

How it All Started

Since 2010 people have been charmed by these small creatures that have traveled the world since ancient times, looking for an ultimate villain to serve. This sounds ominous, but all suspicions are cast aside when you meet minions – they are cuddliest villain-supporters in existence, and they speak most peculiar language. Minion lovers have been wondering whether or not minions’ language has a hidden meaning. All speculation aside, we are here to analyze facts and reveal truth about their speech, so all minion appreciators were in on a secret. Is it real? What are its origins? All these questions will be answered right now, so stay tuned.

The minion language has a special quality that cannot be found in most other fictional lingos – when you hear a minion speak words do not sound completely foreign and you could almost make out their meaning. Strap yourselves in as we go on a learning adventure to discover origins and languages’ nature which these yellow speak.

How Language of Minions Came to Be

It turns out that the language of minion was invented by Pierre Coffin, “Despicable Me” producer and voice actor for most minion voices. This French director had a distinct idea of how his characters should sound, and presented his voice’s to team to better illustrate his idea. Little did he know that team will be so impressed by his vocal representation of fictional creatures, which he will have to voice countless minions in all movies to come. At that time directors had no idea that the movie will be received so warmly and that minions will attract so much attention from the audience and media. As we delve into history of the language that minions speak, we should consider both fictional and real tongue’s possible origins.

Who Voiced the Minions?

From the movies we learned that minions existed for hundreds of years, traveling the world in search of perfect villain. It seems more than likely for them to come across multiple foreign dialects during their journey, and over time adopt their features into their speech. As for the real-life possible minion lingo origin, there may be a clue – we know that director Pierre Coffin is French, same as his father, while his mother is Indonesian.

His multi-cultural background and innovative thinking are why he so skillfully created a complex and dimensional lingo for film. Mister Coffin remains a main minionese creator – no linguist ever worked on this dialect, as director firmly believed that giving lingo structure and rules would take away from its whimsical nature and appeal. Is it possible for you to learn and speak language of the minions? Just try!

Curiously, minion language does not have an official name, but the fandom was quick to come up with a term to describe it – minionese. This term has a nice ring to it and has a similar sound to Chinese, Lebanese, etc. Some also call it “banana language”, which likely originated from a famous tune, as well as color and representation in movies. Also, “banana” is a word that is probably most common in minionese. The point of minionese is to sound funny and silly, without revealing meaning of words. Meaning is meant to be gathered from context, facial expressions, articulation, and body language of minions. Interestingly, this strategy works for real languages as well.

Some people ask – why do the minions speak Spanish? This question cannot be answered without dissecting origin of minion language first. Minionese is a combination of gibberish, Spanish, Italian, English, Hindi, and Japanese, which allows people from across the globe to relate to characters, finding some distinct features of their own language in minionese. Therefore, minionese is a combination of different tongues, not just Spanish, which creates a wonderful version of minion Spanish along with other languages.

Actually, one of the most prominent languages in minionese is English – it’s heard often in minionese, as it appeals to an international audience and allows more people to connect with the language, making it somewhat universal. Furthermore, movies are always dubbed for better understanding and convenience of a foreign audience.

Minionese language has interesting features worth noting. A feature that everybody notices while watching the movies is the abundance of references to food. Many point out that characters are yellow and slightly resemble bananas in shape, so reference to this fruit may also be relative to that fact. Besides the famous “banana” one can often hear mentions of potatoes and apples, which sound like “bapple”. Movie “Despicable 2” mentions “poulet tikka masala”, which is a dish of Indian quinine, while “poulet” is French for “chicken.”

When we ask ourselves “what is the minion language known for?” we often think about its tone. Minionese is spoken in a high-pitched voice that adds a lot of flavor to its sound and distinguishes it from other fictional tongues. This makes minionese less understandable but at the same time emphasizes the curtness and cunning nature of its speakers. We dare you to try speaking in minion fashion at home and see what you are able to come up with!

One of the prominent features of Minionese is that it is internationally understandable, despite being mostly gibberish. This effect is achieved by the combination of languages that are mixed in minion-speak – many traces of European languages can be found in it, which makes it sound like something you are familiar with. Another point that makes minionese understandable for people is that it often features words that majority of the population knows, regardless of their native speak and nationality, such as: “banana”, “gelato”, etc. A key aspect of minionese that makes it transfer meaning without making much sense is the extensive use of gestures and emotional richness of animation – therefore, regardless of what language minions speak, people may get the meaning behind interactions without understanding a single word!

Final and probably the most viable reason why most people might understand minion speak is that minionese words and phrases sound very similar to real ones. What does the minions say? When you listen closely, you can easily distinguish the influence of foreign lingos on minionese. For example, the Japanese word “Kan pai” is used to say “Cheers” in minionese, while minionese “Stopa/stupa” means “Stop”, which sounds the same in Dutch, Estonian, Indonesian, Italian, Polish, Occitan, etc. This distinct feature of minionese language is a great way for it to be inclusive and appealing to a broad audience.

Surely many minion fans would love to get their hands on minionese dictionary or official minion language translations, but we are out of luck. There has been no official information on minion-speak from its creators, nor any confirmation regarding the translation of minionese words and phrases. The only sources of information we have are the movies and the Internet, therefore we don’t possess much knowledge about the correct translations of minionese.

However, minion fans conducted their own research and composed a list of words and sayings, commonly used in the franchise, and their meanings. Translation of these materials also fell to the hands of fans, yet since movies have a diverse international fan base, interpreting the meaning behind words wasn’t an issue.

Some Words & Phrases in Minionese Language

If you are interested in some of the most popular phrases and some minion language translations, here are the ones we don’t tire to hear, along with their possible origins:

There are other prominent phrases in minion-speak, which clearly show you what language do minions speak and how it was created. Maybe in the future, if more minion movies are made, language will grow into something bigger, forcing the need to develop grammar, vocabulary, and more.

What is minions language? Hopefully, we answered this question in full today, so all minionese enthusiasts and appreciators may be in the know about this wonderful tongue, as whimsical as its speakers. There will always be a special place in hearts of people for these interesting creatures and their language – they are loved by both children and adults, and despite novelty of their popularity, minions already transcended our generation and became a memorable pop-culture element of modern world. These bubbly, lovable, chatty goofballs with their uplifting speech bring joy as well as feel-good vibes which can touch everyone’s soul.

It’s always fun to see how real-life things, like language, are reflected in cinematography, art, music, etc., and trace their influence through time, people, their creations. Making it a complex process, even with simplified ones such as minionese. It takes plenty of research, dedication, creativity to put together something new, different, inspiring – especially so in modern times. If you like these yellow cuties we urge you – do not hold back, study language and you may make a few pleasant discoveries. Poopaye!