How Many Languages does the Pope Speak? 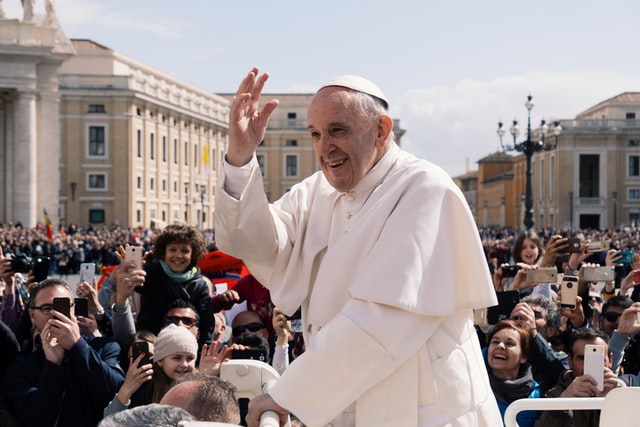 Today we’re answering the question many are curious about – how many languages does the Pope speak? When we talk about well-known polyglots, we generally don’t mention Popes, which, if you think about it, indicates poor judgment on our part! Since long before world started blogging about currently famous polyglots and linguists, pontiffs have been brilliant representatives of linguistic community through time.

Knowledge of foreign tongues ​​has long been one of unspoken, but indispensable conditions for accession to the Holy See. Head of Catholic Church worldwide, always required a good knowledge of Latin. First polyglot pontiff was John Paul II, who spoke 12 lingos. Benedict XVI was fluent in 7 languages. Position of Holy Father currently resides with Pope Francis, who became the pontiff in 2013 after Pope Benedict XVI’s resignation.

Pope Francis, formerly known as Jorge Mario Bergoglio, originates from Argentina. He is fluent in Italian, which he learned as a child in Argentina from his father and grandparents who were Italian immigrants. During his early days, he only spoke Italian in public. His Holiness is fluent in Portuguese as well as Spanish. During his years in Germany, Francis learned German, however, he admits that he speaks it very poorly. French is also among known Pope Francis’ languages.

If you are curious what language does Pope Francis speak with most difficulty, answer is, surprisingly, English. Francis is known to have avoided speaking English during his public appearances. He admitted having issues with his learning English due to its phonetics. To improve his English Pope Francis stayed for 3 months in Ireland. His first attempt to speak English publicly took place during a Mass in Soul one year after election.

That being said, Pope Francis is being successfully working on his English over the past years. Curiously, His Holiness speaks Ukrainian, as he was mentored by Ukrainian Bishop Stepan Chmil when he was young. As expected, Pope Francis is familiar with dialects required for biblical studies, like Biblical Greek, Latin, and Biblical Hebrew. So, how many languages does Pope Francis speak? His total number of spoken lingos is about 8.

Pope Benedict XVI: What language does the pope speak

Joseph Aloisius Ratzinger, a predecessor to Pope Francis, became Pope Benedict XVI in 2005 and held this position up to 2013 until he voluntarily resigned. This action was borderline shocking because one commonly remains a pontiff from their election day and until death. The last voluntary resignation is known to have taken place as far as 1294!

Pope Benedict comes from Bavaria, Germany, thus his native tongue is German. He is fluent in English, Spanish, Italian as well as French, which, needless to say, is quite impressive. He also speaks some Portuguese. In addition, he’s proficient in classical tongues of the church such as Latin.

No one can deny that the most linguistically-gifted and famous multilingual pontiff was John Paul II. This Catholic polyglot king occupied his position from 1978 to 2005, until he was replaced by Pope Benedict XVI upon his death. John Paul II, formerly named Karol Józef Wojtyła, was from Poland, so naturally, his first tongue was Polish. He was fluent in Portuguese, Italian, French, Spanish, German, English, as well as classical written Latin, Biblical Hebrew, etc.

However, he was well-versed in Slovak, Russian, Ukrainian, Japanese, Tagalog, and others. It’s known that he could speak many dialects in public with minor preparation, which is truly impressive! Fun fact – once after Easter mass he gave a greeting in 57 different languages, and on another occasion – a Christmas greeting in 62 lingos! This tremendous amount of languages is hard to learn, so we applaud His Holiness for dedication it took to learn them. Many believe that his passion for languages arose from his fondness for travel – he visited 129 countries during his lifetime, which is more than any other pontiff throughout history!

Vatican City and its Multilingual Reach

According to Vatican law, official languages are Latin and Italian, which are languages for official publications in Vatican City. However, Italian is the lingua franca of the Vatican, having replaced Latin as a working language. Vatican legislation suggests that any other languages, which are ​​necessary for work, can be used in Vatican City. The last point is very important, given the worldwide spread and popularity of Catholic Church – by 2020, there are over 1.3 billion Catholics in the world!

So, the Roman Catholic Church is in fact a multilingual institution. For example, messages of the Pope Urbi et Orbi (“To the City and the World”) are read out in dozens of languages. The main Vatican’ printing house, symbolically called Tipografia poliglotta vaticana (“Multilingual Vatican Printing House”), prints publications in many languages. In its turn, Vatican Radio broadcasts in 37 tongues, including Russian, Belarusian, and Ukrainian, while official Vatican newspaper “Osservatore Romano” (“Roman Observer”), in addition to daily issue in Italian, publishes issues in French, English, German, Spanish, Portuguese, and Polish. This is wonderful news for Catholics all across the globe.

Languages of the Mass

Commonly papal Masses are held in Latin. However, it’s also appropriate to use local dialects when Mass takes place in a country or region where certain vernaculars are common. Choice of the language for the Mass nowadays resides with Holy Father.

You may ask, what was the primary tongue of the Mass, held by different Popes? It’s known that through years different pontiffs had their preferences over languages they mostly used. For example, current Pope Francis prefers using Italian for most public appearances but also performs Masses in Latin. When a pontiff is performing a Mass in a foreign county, it is customary to use a dialect of said country. For sure, there are exceptions – for example, many attendants of Mass in Washington, USA, were surprised to have been part of a Mass by Pope Francis that was fully in Latin.

Must-Have Languages Every Pope Should Speak

There are certain requirements for lingos every Holy Father must know. Popes’ languages are official languages of Vatican City – Italian and Latin. These are of utmost importance, as all official documentation is published using them. As mentioned before, Latin is a primary language for Mass, while Italian is lingua franca of Vatican – therefore they are mandatory.

Knowledge of classical written languages like Biblical Hebrew and Greek is also required, as they are needed for biblical study. Without them, no pontiff can sufficiently and adequately represent Catholic Church.

Holy Father is a figure everyone knows and respects, he is a spiritual leader for many people across the world, so it’s only natural for a Pope to be well-versed, educated, and accustomed to many languages, so that teachings of Catholic Church were available for all Catholics of the planet, despite their native country and languages they can speak. It should be equally convenient for all people to be a part of the faith and not be restricted by their native tongue.

It is worthy to recall a story about Tower of Babel, from which we receive a notion that people can be divided and unable to connect with one another when they speak different lingos. This makes us even more grateful to all polyglot Popes who helped bridge the gap with their knowledge!